Just wanted to post a link (below) to my recent appearance on the Ruby Rogues podcast. The conversation centers around imposter syndrome, how to succeed as a developer, and engineering team culture. It was a blast talking to these guys! Thanks to them for having me on!

I’m going to take a slightly different approach with this post and talk about a very cool and timely ruby gem called kovid that I recently discovered and contributed to this weekend.

Ever since the pandemic began I’ve been wanting an easy, centralized way to get COVID-19 data, and this gem is exactly that. It’s a CLI tool that you can use to get worldwide data, to compare data from various countries, and even compare data at the state level in the United States. See the docs for more info.

This week I got into a routine of running kovid check USA and kovid state Tennessee (see output below) every morning before work just to get a sense of how things are going, and after a couple of days I realized it would be great to have the ability to see a table of all the US states for comparison. The docs listed a feature that allows you to do kovid states Florida Tennessee, for example, to compare multiple states, but it wasn’t working and there wasn’t an easy way to get data on all of the states at once without typing them all out. So, I figured I’d take some time to fork the repo this weekend and take a stab at adding this country wide data feature and also look into fixing the issue with state comparison.

After having a bit of struggle getting things set up for local development, I was good to go. I got the country wide feature added, and I fixed the bug with state comparison (see my pull-request here if interested). If you now run kovid aus you will see all US states listed in order of COVID-19 cases descending. 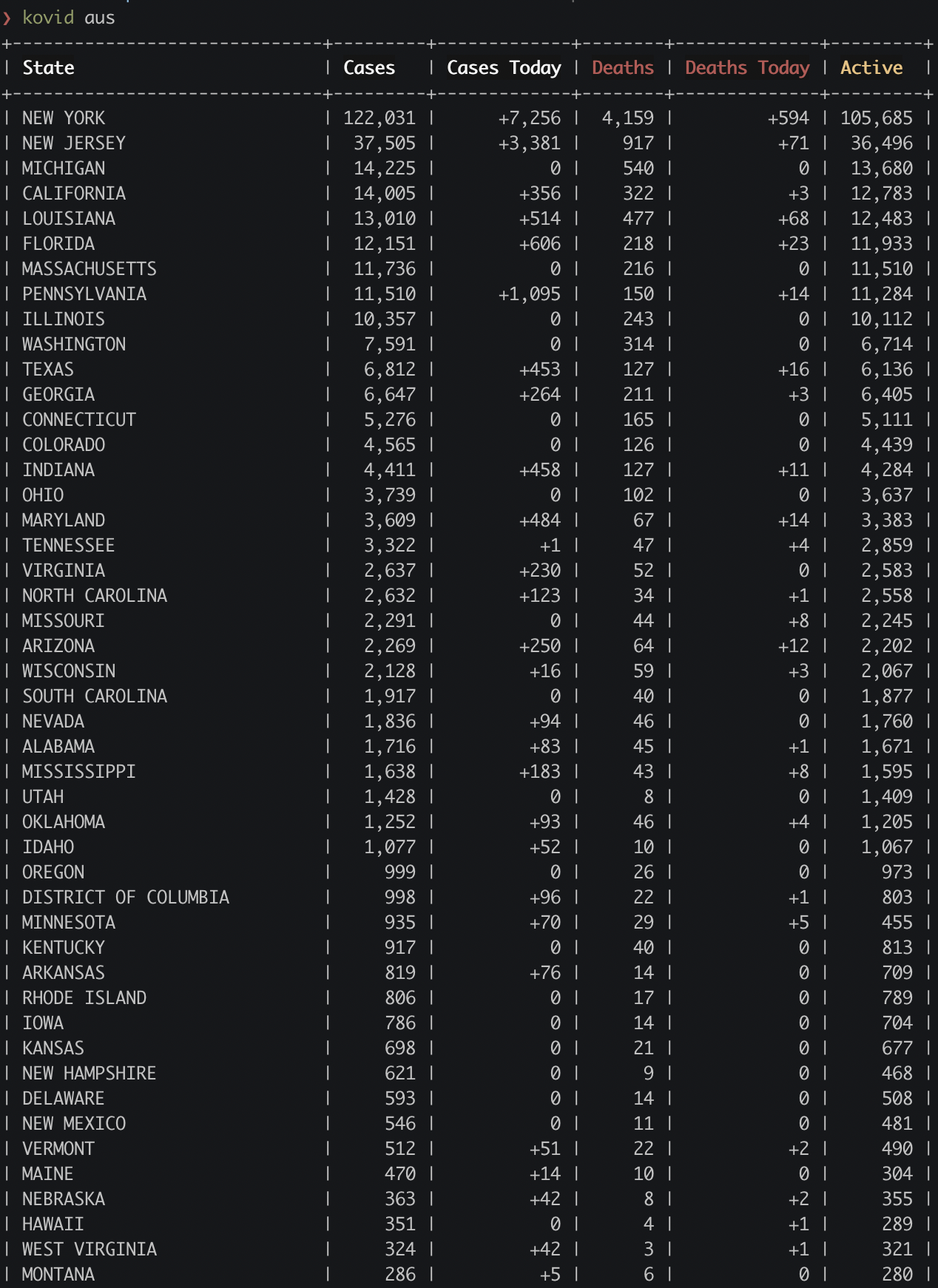 This was my first time contributing to an open source project in my free time, and I must say I found it deeply satisfying. I got to work within a design pattern that is new to me, I got to collaborate with other rubyists across the world, I got the feature I wanted and can now use, and I made the gem a little bit better. I hope to contribute more features in the future, and I hope others find the gem useful during these tough times.

I learned a great ruby tip this week for getting a specific list of methods available on an object, so I thought I’d make a post about it. The first part of the post explains the tip, and then the second part goes into how I recently used it.

Is there a way to quickly see a list of all of the methods available for a ruby object that does not include the methods that object inherits from the Object class?

I have been using the methods method for a long time and have always found it a bit annoying that the result of calling {your_object.methods} always includes the methods on the Object class. It makes perfect sense why this is the case, but typically when I am in search of available methods I only care about seeing the methods that are specific to the object I am troubleshooting. So, to get around this we can leverage ruby’s - method to get a list that is not polluted with the methods we don’t care about.

The Bug I Was Working On

While the list of situations where this tip could come in handy is endless, I wanted to quickly explain how I used it this week so people can see an example.

At GoNoodle we’ve recently been betting a lot of errors while uploading users to CloudSearch. It’s been a bit tricky to debug because it happens intermittently with no clearly discernible pattern (the best type of bug), so instead of endlessly spinning my wheels on the issue I decided to leverage our BugSnag integration. The method looked like this before I added my debug code:

What this new code does is ensure that we get a BugSnag notification (with details) every time an Aws::CloudSearchDomain::Errors::DocumentServiceException exception is raised (this is what happens when a user is not uploaded to CloudSearch).

How I Used The Tip

When I was implementing the code above I could not remember the Exception methods that were available for providing details on the exception (code and message), so I quickly put a binding.pry (see pry) in the rescue block and ran e.methods - Object.methods and got the following list: [:code, :message, :full_message, :backtrace_locations, :backtrace, :cause, :exception, :set_backtrace, :blamed_files, :describe_blame, :copy_blame!, :blame_file!]. This gave me exactly what I needed!

In summary, the next time you find yourself wondering what methods are available on an object and you don’t care about seeing the methods from the Object class, run {your_object. methods} - Object.methods and you should be good to go!

Throughout my career as a Rails developer there have been a number of times that using Rails callbacks for debugging purposes has come in handy and saved me a ton of time and frustration, so I thought I’d take some time to share this approach. To put it simply, if you’re seeing any odd behavior relating to a Rails object being created, updated, or destroyed, this may be a way for you to easily get to the bottom of what is going on. Some might argue this approach is a bit hacky, but when it comes to debugging I think anything goes as long as it gives you the right answers.

When To Use Callbacks for Debugging

While this technique could be used for any of the Rails callbacks, I have mostly used it in the following contexts.

How To Use Callbacks for Debugging

The implementation of this is relatively simple; if one the aforementioned unexpected behaviors is occurring, put the related callback in the correct model with a binding.pry (see pry) and use caller (see caller) to help identify the source of the unexpected behavior. Let’s look at a simple example.

This test is going to fail because the player count will be 2 and not 1. The reason for this is that let!(:team) { create(:team, :bucks) } (specifically the :bucks attribute) causes the Team factory to create the Giannis Antetokounmpo player for that team, so when team.create_player(name: 'John') is called there is already an existing player. See factory_bot for more info. While this is relatively easy to spot in this simple example, in a real world situation the let!(:team) { create(:team, :bucks) } could be hundreds of lines above the failing test, and getting to the bottom of why this test is failing could take a long time. This is where using callbacks comes into play, so let’s add that now.

When I run the test again with this debug_test_failure callback I will hit the binding.pry every time a player is created. Once this pry is hit I can call caller to see the execution stack, which will point me directly to code that is creating the player. For this test my binding.pry will be hit twice (once for let!(:team){ create(:team, :bucks) } and once for team.create_player(name: 'John’)), and it’s on the first hit that I will be pointed to the line of code that is the culprit. From there I can fix the test accordingly and then remove the debugging callback I added to the player model.

It is worth noting that the simple example above, while helpful for capturing the technique of using callbacks for debugging, does not fully illustrate the full potential of this technique. It’s when you’re dealing with code bases that have evolved over years and have many dusty corners that this can really save you a ton of time and frustration. So, hopefully the next time you are scratching your head over the source of some unexpected Rails object behavior, you can apply this approach.

I was recently tasked with upgrading our codebase at GoNoodle from Rails 5.2.3 to 6.0.1 , and I wanted to take some time to document my experience and share some tips that others might find helpful. My main objective here is to articulate what I learned, and to draw attention to any hang ups I ran into that were not directly addressed in the Rails migration guide. It is worth noting that because this was my first time doing a major update, some of what I mention will be version update agnostic and will just be general Rails upgrade tips, but the rest will be specific to this version upgrade.

The multi database support in Rails 6 is something we were really excited about, and while the docs for setting this up were by no means bad, there were some things that were left a little unclear. Here are some of my findings.

To take full advantage of the Rails multi database support, we set up most of our models to read from our replica, and we activated automatic connections switching. When we first started implementing this we realized we were a little unclear about how this all worked, and in an effort to be sure we were implementing everything correctly we took some time to do some testing and answer some questions (listed below with answers) relating to the portion of the docs outlined below.

Once we were confident in the answers to these questions we updated our code by doing the following.

After successfully updating the Rails version I got the following error when trying to run the app locally. Expected to find a manifest file in app/assets/config/manifest.js. To handle this I had to do some digging and found the following post by Richard Schneeman, which directed me to do the following.

The first thing I did to get started was to update the Rails version in the gemfile and run bundle update rails, and this resulted in the following error. Note that while my subsequent explanation will apply to the actionpack scenario listed below, the core way to address this error applies to all gems.

All in all the upgrade experience, aside from a major hangup we had with our mysql_online_migrations gem (see details here if interested), was fairly straightforward and painless, and I definitely learned a lot. Lastly, I want to give a shout out Travis Roberts for all of this help during this process. His contribution was invaluable.

After giving it some thought, I’ve decided to write a post cataloging the various tools, tips, tricks, and commands that I could not live without. These have been gathered over the past three years, and I know that a list like this would have been invaluable to me when I was first getting started. Luckily I had a lot of great people around me to clue me in to this stuff, but for those who are not so lucky, I hope this post is helpful.

These plugins are specific to atom, my editor of choice, but if you don’t use atom you should still be able to find something very similar.